The
Map column headers
operation takes source files with differing header schemas and maps them to a unified header schema. This allows the datasets to be unioned.
For example, you may have three source files, each with a column of policy numbers, but named differently in each dataset: Policy Number, Pol. #, Policy Num. These column names can be mapped to a common ‘Policy Number’ field.


A typical workflow incorporating column mapping would be:
Additionally, columns in the output dataset can be added, removed or re-ordered, and empty or missing columns in the source data populated with text or numbers. 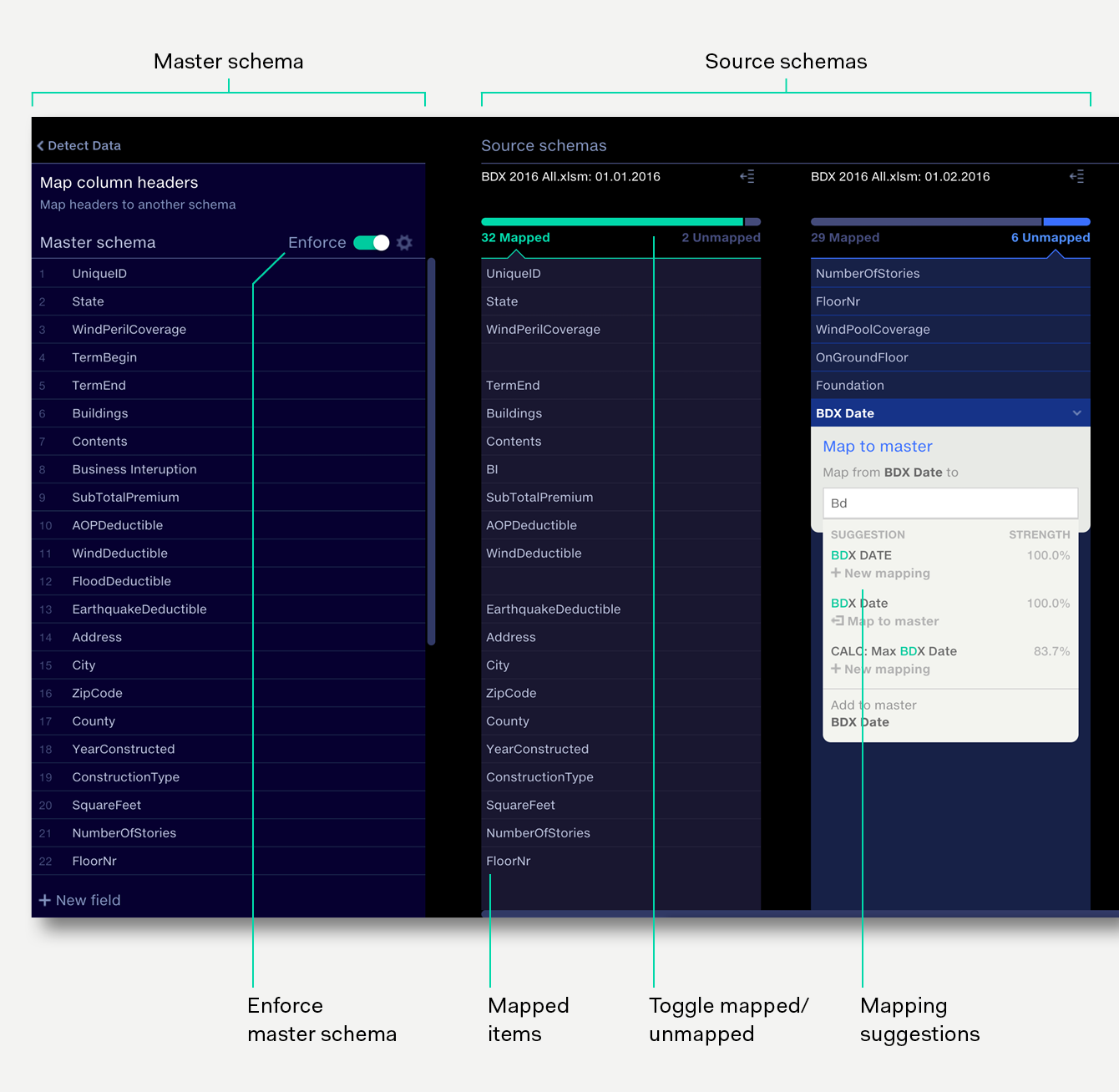 Lists of columns in source schemas. Horizontal position of mapped items indicates their mapping to the master.

The layout shows each column mapping across the source schemas and the master schema horizontally, making it very quick to visually deduce the mapping structure across all your sources.

Toggle between mapped and unmapped items.

Clicking on an unmapped item suggests mappings in the master schema, alongside suggestions for new mappings.

On opening the operation, the initial view shows the distinct column structures across the input files to the operation, with no master schema or mapping defined. 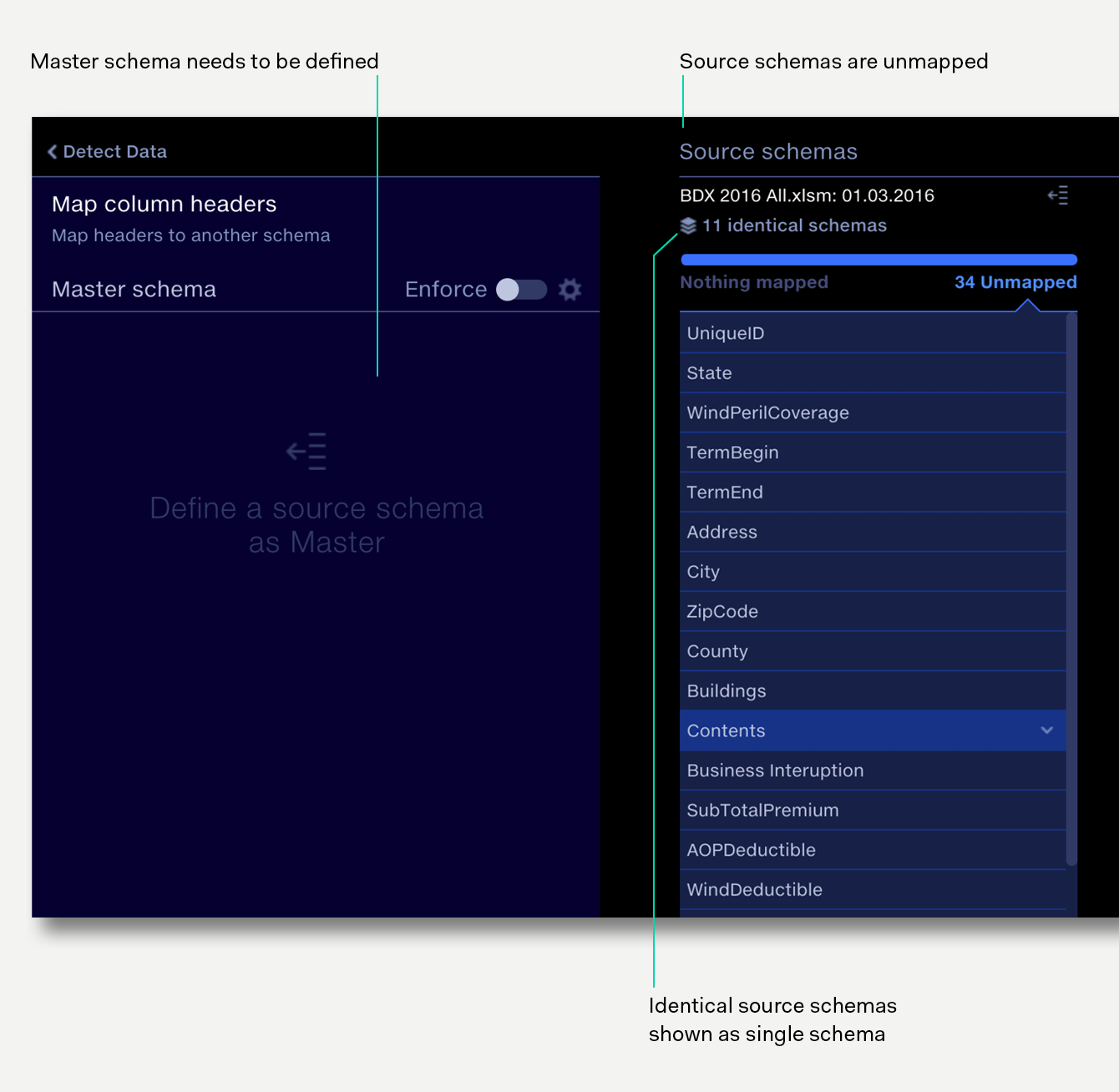 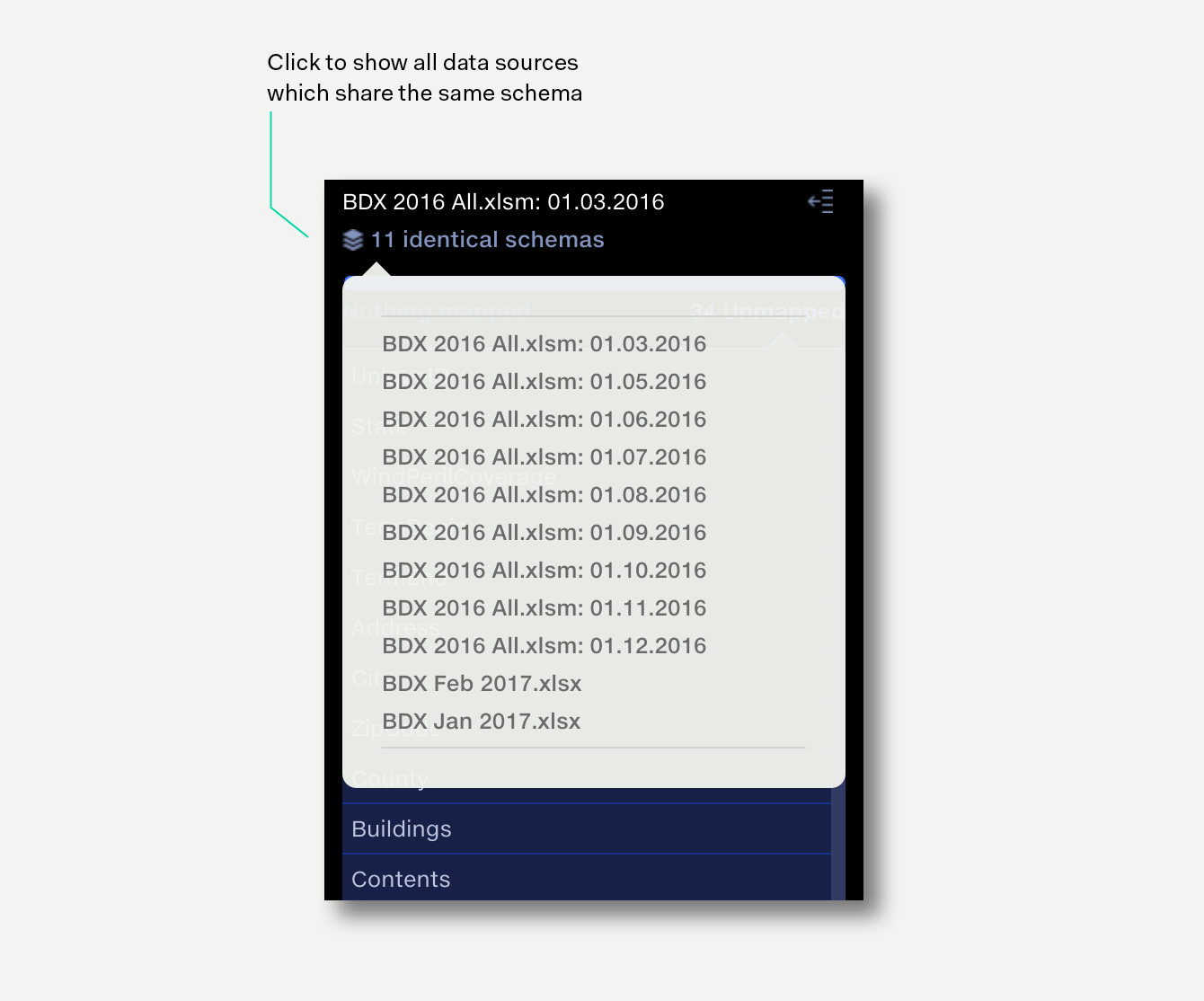 Define a source schema as a master

The most common scenario is to use one of the displayed file schemas as the baseline for the master schema and then to map any remaining column headers from the other source schemas to the master. 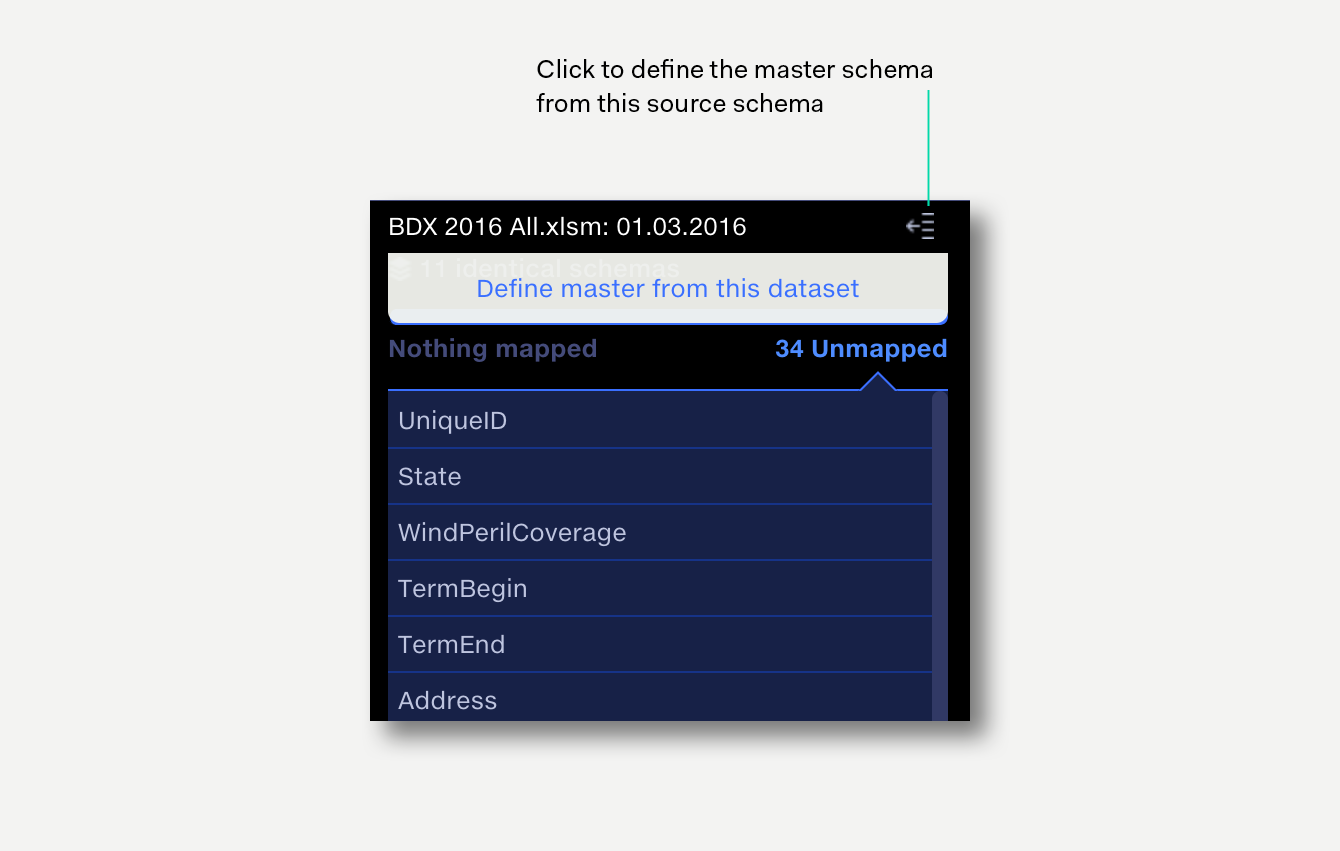 Click on
Define master from this dataset
for the file schema that you wish to use as a starting point for the master schema template. This will instantly:
Define the selected source schema as the master


Map all of the column headers in that schema to the corresponding columns in the master schema.


Maps columns in the other source schemas that have the same name as the columns in the master schema. The column name is case-insensitive in the mapping.
Tip
Keep a dataset which represents your organisation’s target mappings in your data repo, and reuse this when you wish to create new pipelines.

Rather than taking a whole source schema as a starting point, individual fields can be mapped in from one or more source schemas. See Mapping in source files below.

Alternatively a master schema can be created from scratch by manually entering fields. To add a new field, click the
New field
button at the bottom of the master schema, enter the field name and hit return (↵). 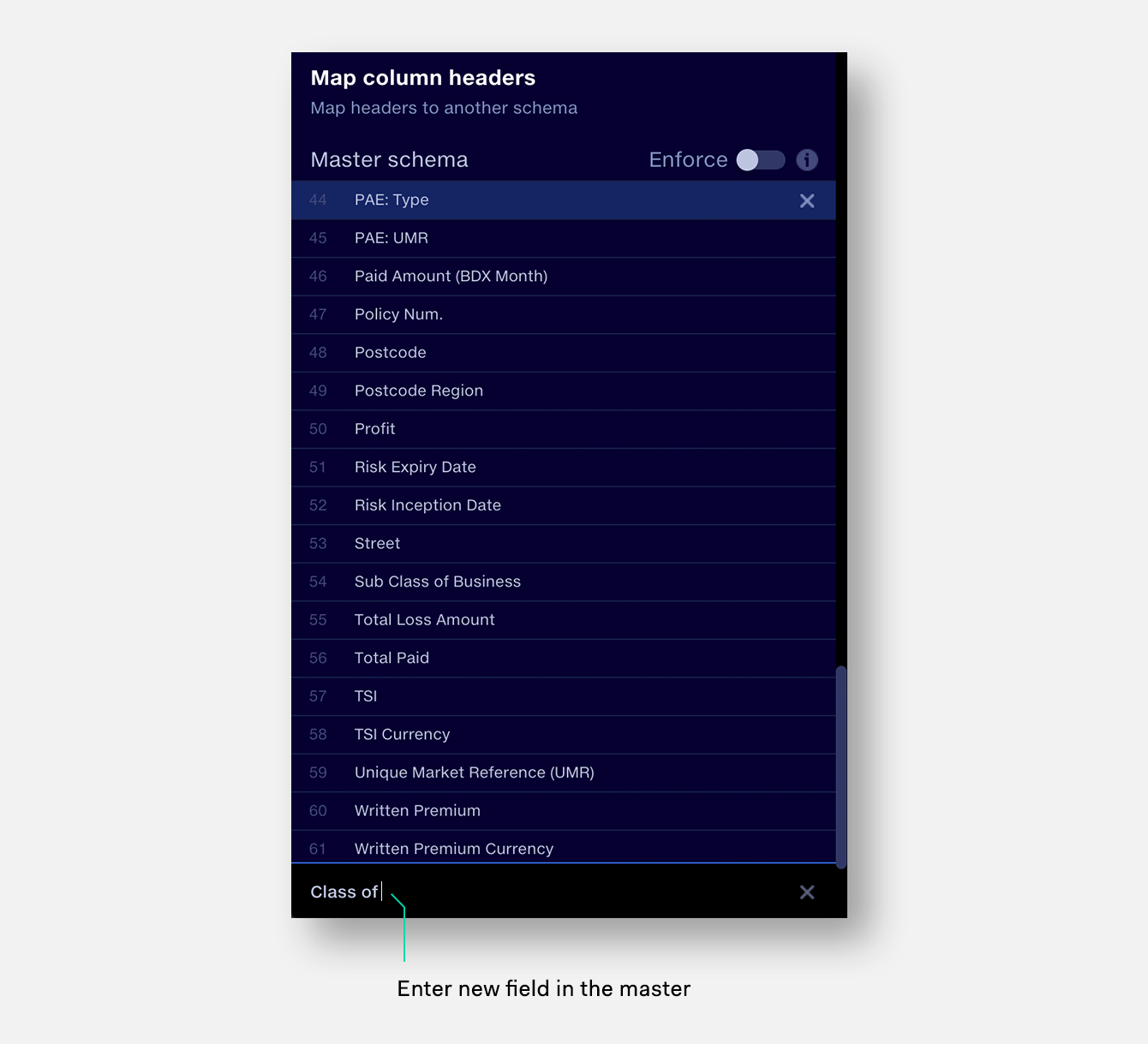 To view unmapped fields in a source schema click on the
Unmapped toggle
. Clicking on an unmapped item reveals mapping suggestions. 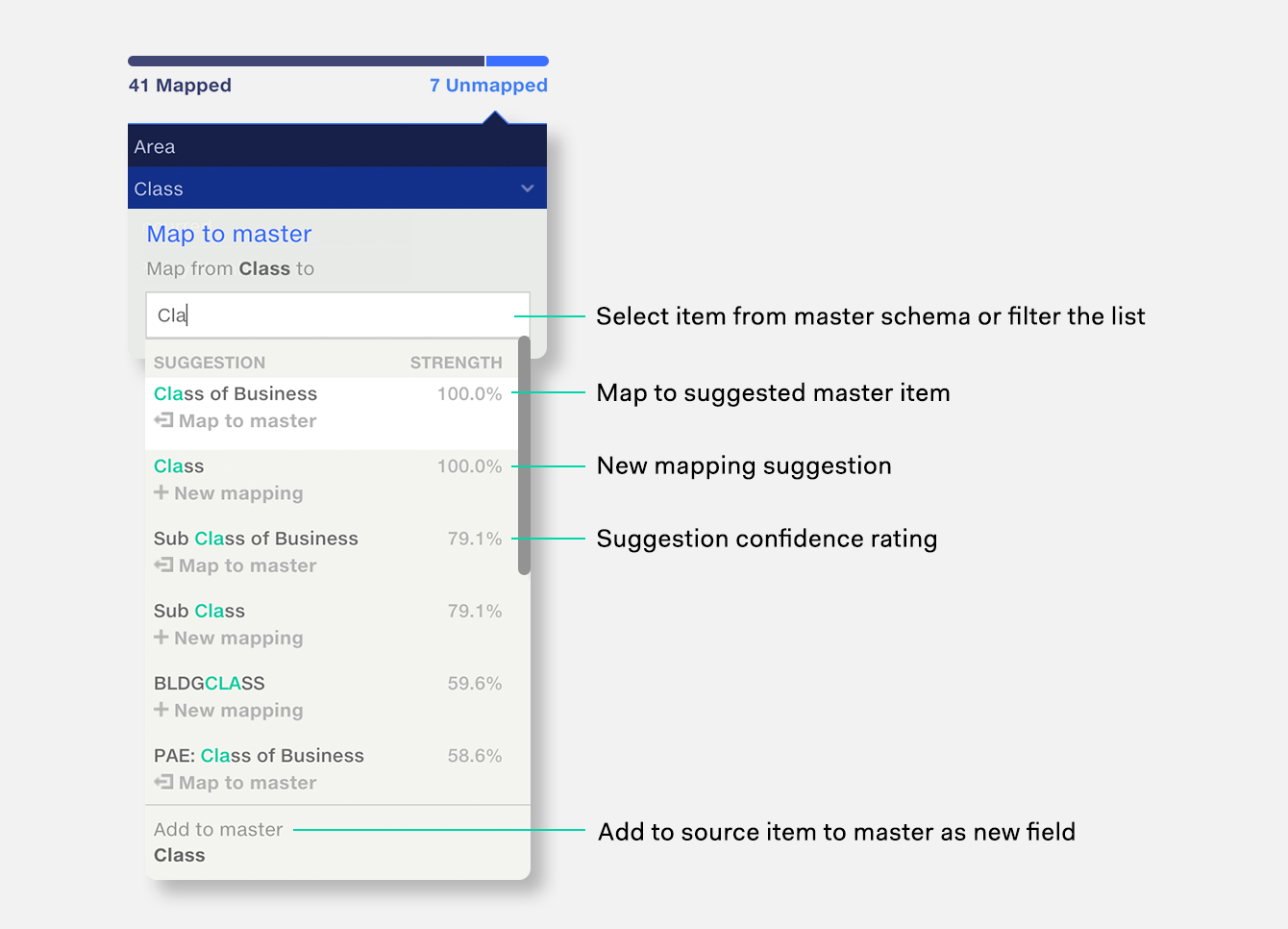 Unmap the item from the master schema. Item returns to the unmapped column.

Remap the item to a different available item in the master schema. Master items that have items from this source schema already mapped to them are not available.

Replace the item with one of the unmapped items in the source.

If Enforce schema is enabled, fields in the source can be populated with a data value or text. See Populating source fields below.


Unmapped source columns will be removed.


Columns can be populated with values.


Column order of output files will be unchanged from the order in the source.
Enforcing the master is automatically enabled when defining a master schema from a source dataset.

For a given source:
Apply the following mappings:
Outputs when enforce option is enabled / disabled:

Where a master schema has been defined and a new input is added to the stage, the operation will apply the following default mapping rules:
A warning will be shown in the stage panel if, after applying the above rules: Once the mappings have been reviewed in the column header mapping operation the warning will be removed

For a given source:
and the following mappings:

Adding another input with the same schema as the initial source will apply the same set of mappings to that new input.


For a new source schema:
will result in the mappings:

When
Enforce schema
is enabled and a source file has no data for a master field, that field will be output as an empty column by default. This column can be populated with homogenous data if required. For example, if your master schema contains the field currency, yet your source data has no currency column, then the empty fields can be populated with a currency value. 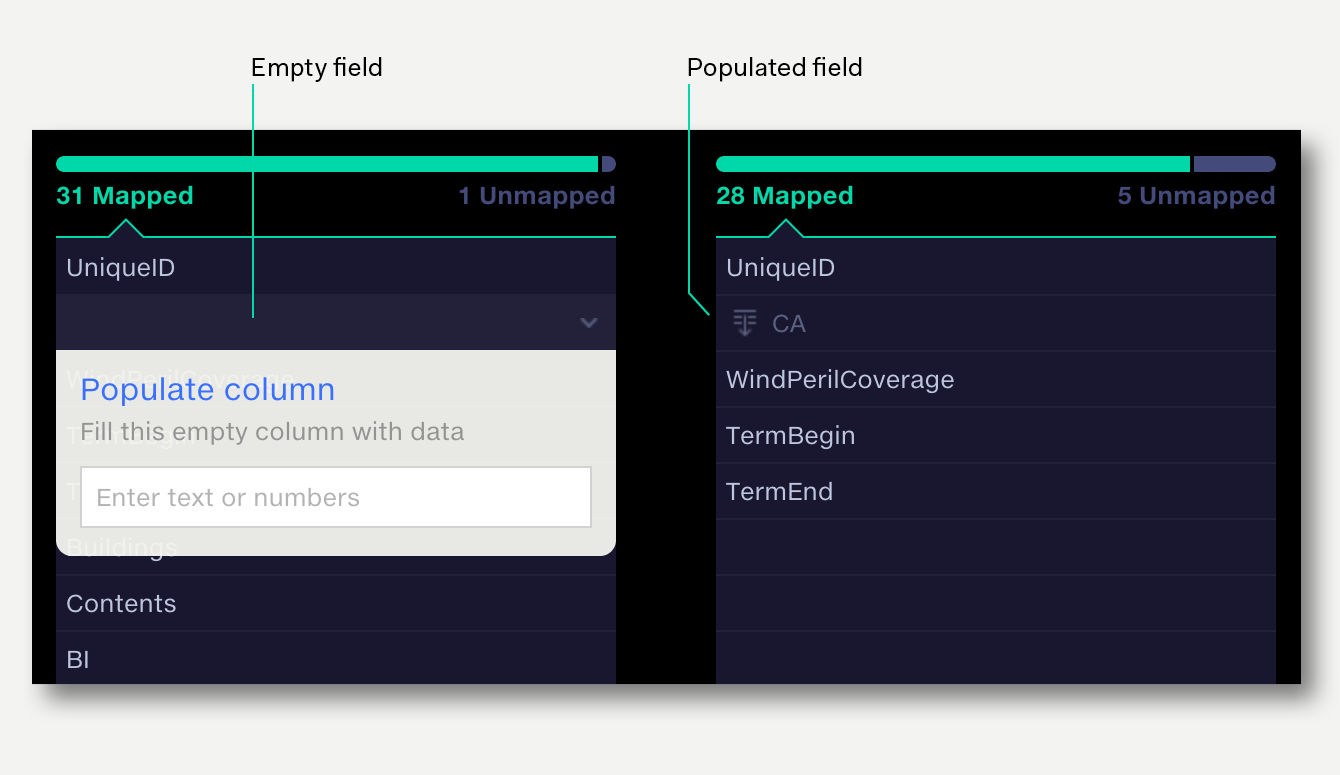 To populate a source column:
To remove populated data

Populate all unmapped fields at once

Sometimes source datasets may not contain all the columns in your master schema. It’s often useful to populate these blank columns with a single value, such as ‘Unmapped’, so when the data is used in Analyse, these datapoints can be identified and filtered out. 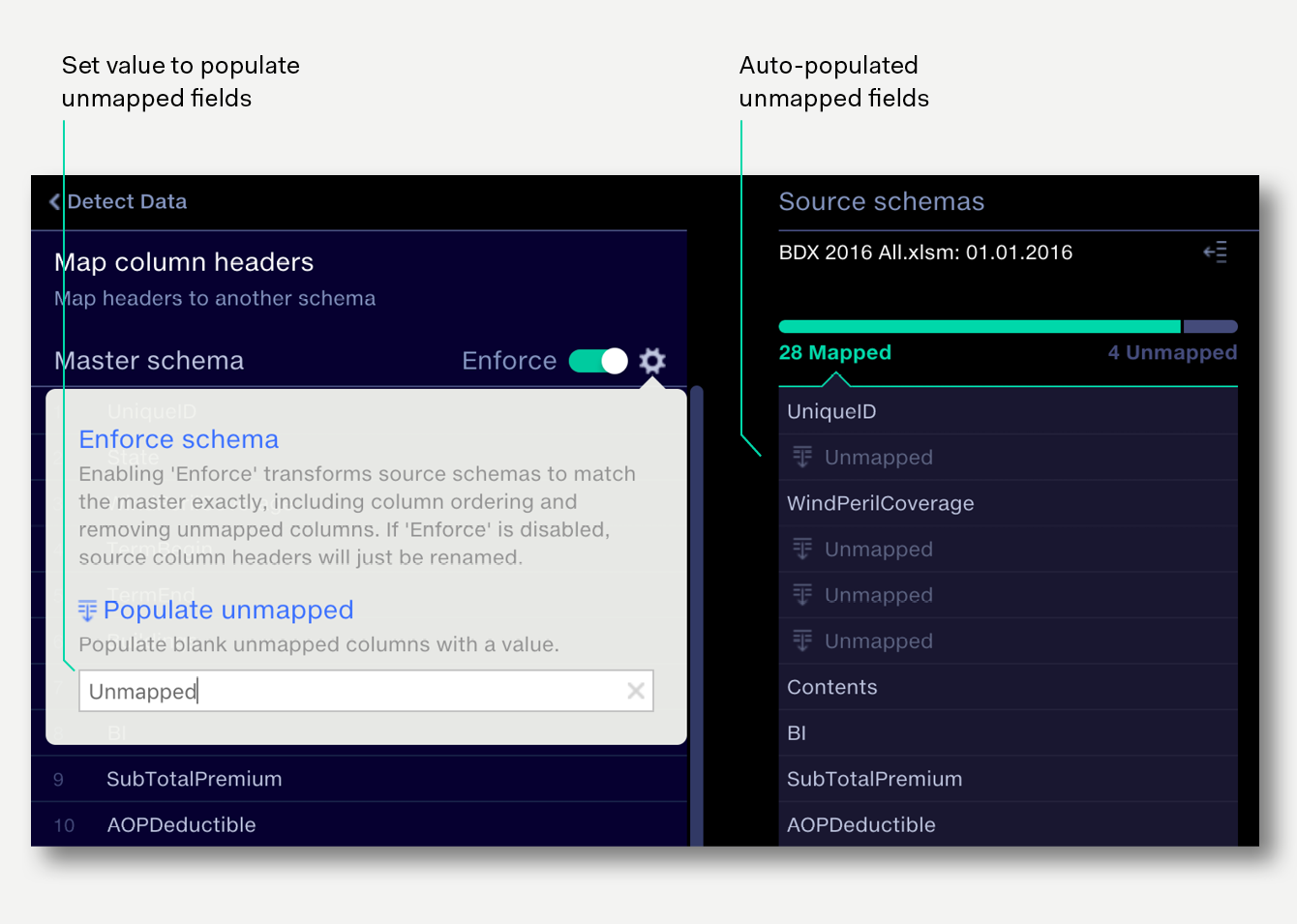 The Automap function automates the column header mapping process by applying all suggested mappings above a user-specified strength threshold. 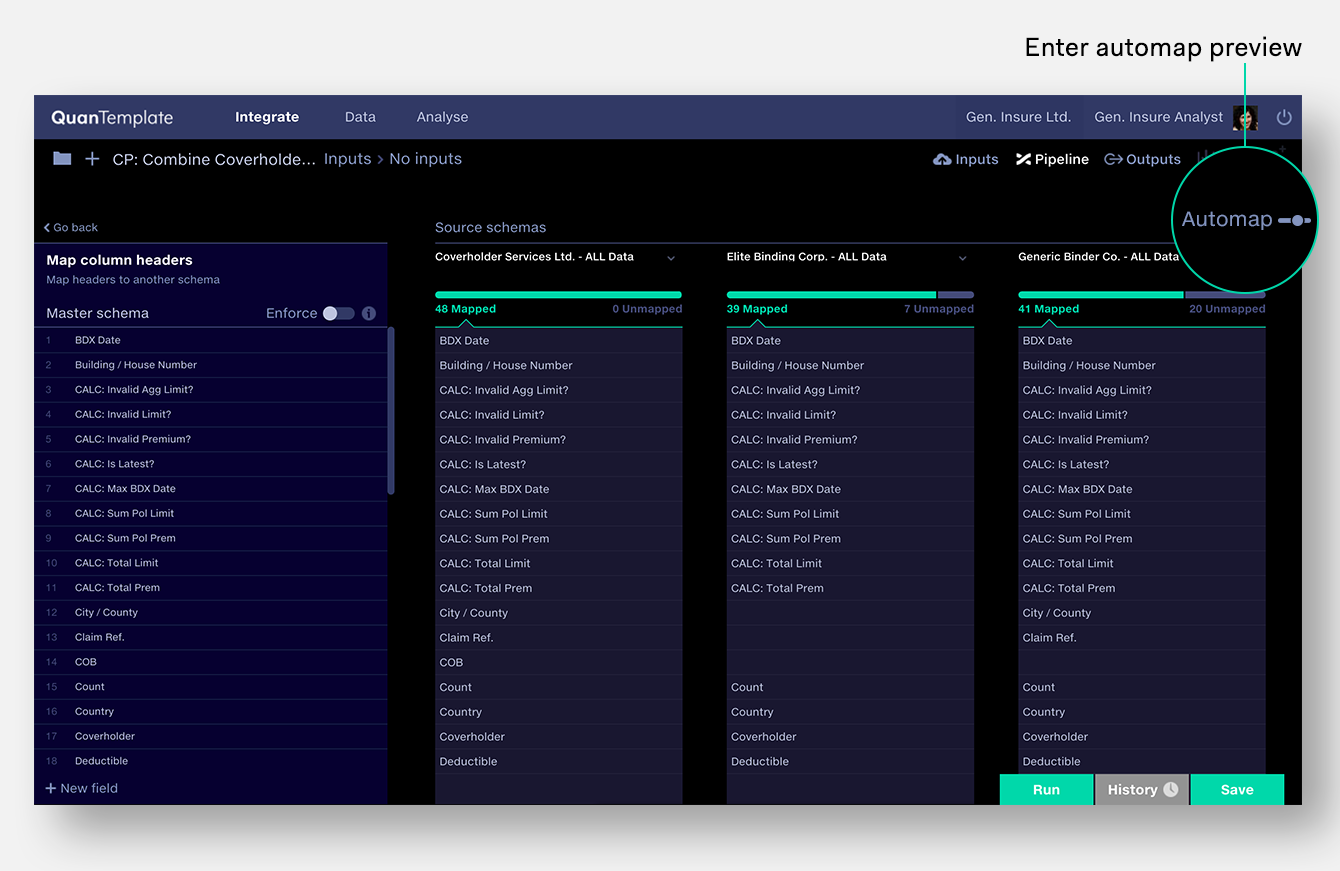 The Automap preview mode shows the effect of adjusting the strength threshold on the applied mappings. 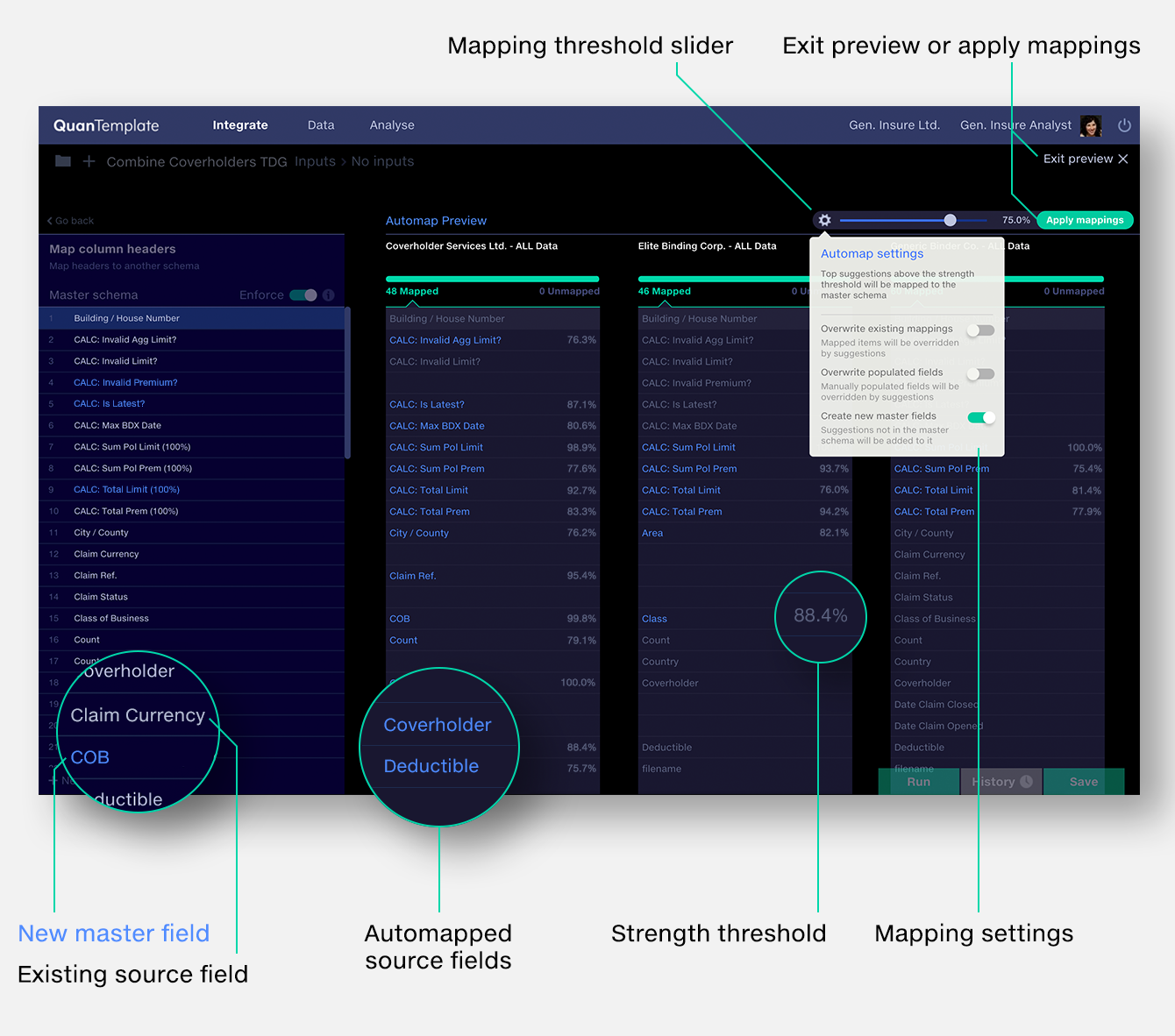 To Automap:
Note that for any given schema mapping suggestions and strength ratings may change over time as the ML-powered decision-making model learns from your mapping choices.

Mapped items will be overridden by suggestions. This is a ‘destructive’ mapping option since any mappings you have made previously will be overwritten. Off by default.

Suggestions not in the master schema will be added to it. Off by default.